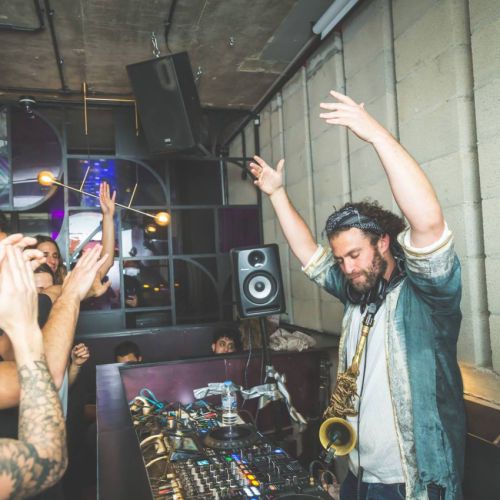 ITAI is an artist who impressed many people in 2021 when he dropped his debut album ‘A Trip To Idyllwild’ and out now is a new selection of remixes. That release showcased him as a skilled saxophone player who blends live musicianship with electronic sounds. He also showcases this when he is booked to play DJ sets, as he plays improvised saxophone sections over the top of the records he’s mixing. Many of his album tracks feature prominent saxophone sections along with other live instruments and organic percussion that’s blended with sequenced kick drums and other dance floor friendly elements. Its slow tempos and strong jazz influence made the album a perfect crossover that was suited to DJ sets and chilling out at home, as it’s both an uplifting mix of warm atmosphere and hip shaking grooves. Lots of the new remixes lift the tempo and simplify the percussion with hypnotic loops that are crisp and full of flowing energy, so the saxophone and other lead sounds from the original versions get their chance to really shine through. Both the original and remix version of the album have been released by Laroz’s record label Camel Riders and those providing remixes include PheuZen, Matija, Zuma Dionys, Richard Elcox, Just Emma, Urem, Max Tenrom, Dandara, Alvaro Suarez, Catori and Noraj Cue. The majority of the remixes remain within the organic house and downtempo electronica genres, but there are a couple that are verge on melodic house/techno such as the one by Noraj Cue. Catori’s remix also stands out for being somewhere between deep house and deep tech, and this rework is also the biggest transformation between rework and original, and it’s got an added vocal creating a whole new groove. We won’t break down each remix individually, but for anyone who likes the original versions, all of the remixes are definitely worth checking out, as there are some real gems in the package.

Buy on Beatport: ITAI – A Trip To Idyllwild Remixes

Out now, is a new release by Da Mike who’s a Greek artist with links to the Global Fantasy…